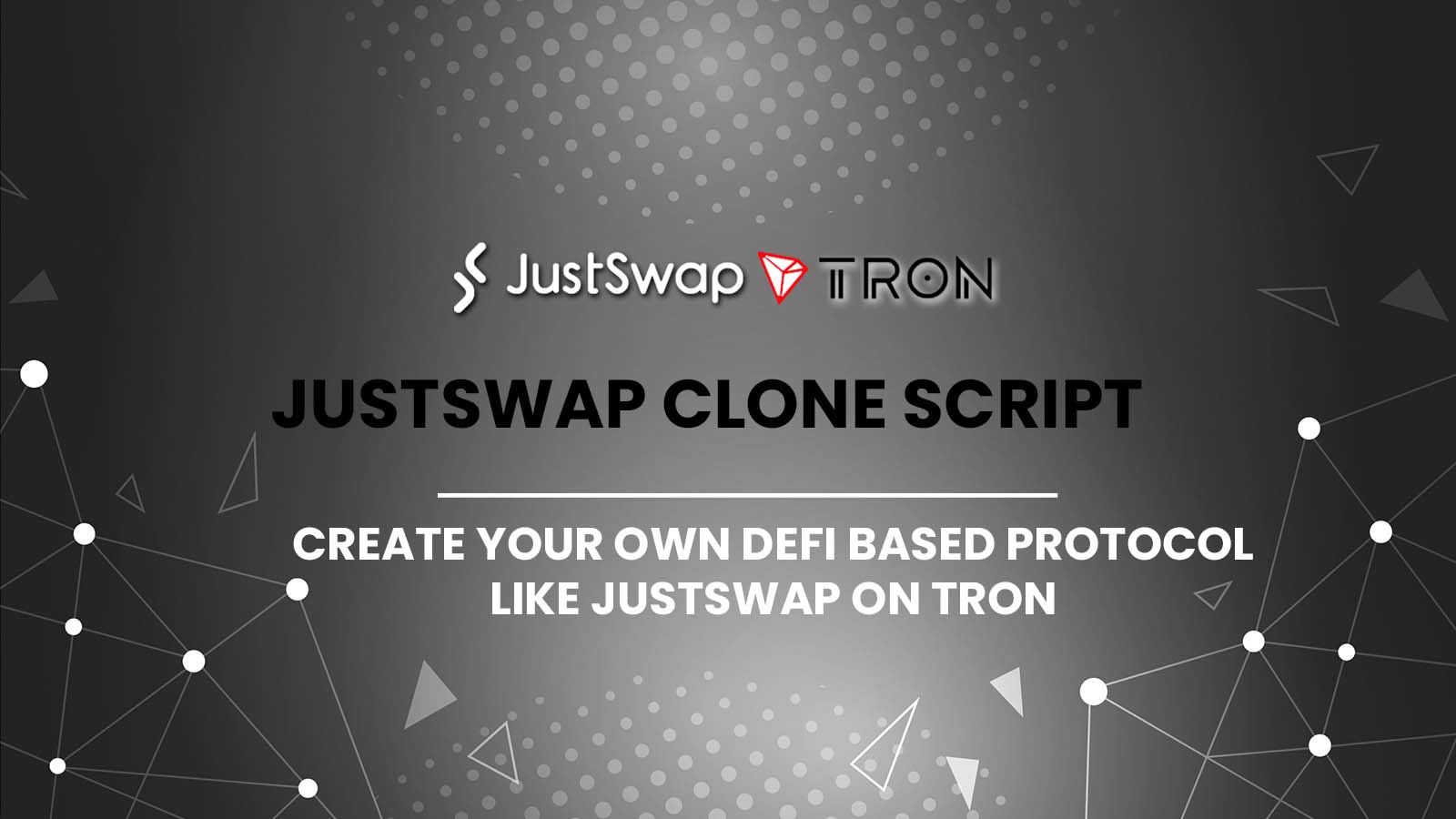 Globally, decentralised finance is one of the booming financial sectors. It is also not restricted to a particular business but also suits all kinds of business to heighten the non-regulated and highly effective digital business arena.

Precisely,decentralised finance is increasing in the exchange platforms which makes it more user-friendly to the traders. Right from the beginning of swapping mechanism to current conversions among two blockchains without any technical issues or loss of information, we can realise the growth of the DeFi sector.

JustSwap is a TRON based automated liquidity DEX protocol that helps the users to exchange their TRC20 token easily and instantly in a decentralised way.

JustSwap is a decentralised exchange protocol that works on the Tron blockchain. It is one of the trending platforms among crypto and other kinds of business entrepreneurs due to its liquidity automation, transferability and interconnectivity , because it has the capability for interchanging the TRC20 coins.

One of the fascinating features about the JustSwap is that you do not need to register the JustSwap account to pool or stake cryptocurrencies. The simple thing is that you just need to log into the account using your decentralised wallet link. They currently endorse the Tronlink Wallet.

JustSwap clone script is a decentralised Tron based protocol that runs effectively on Tron blockchain like JustSwap to automate the liquidity provision.JustSwap clone script can be created using the original JustSwap protocol and can be launched instantly with the help of technical support from our developers. This DeFi script protocol allows the users to exchange their TRC20 tokens instantly as well as liquidity provider, mining rewards and earn trading fees. As an outcome, JustSwap DeFi exchange protocol revolutionises the Tron infrastructure. Moreover, this script allows the global traders to exchange and trade TRC20 tokens directly without any intervention.

Moreover, it is 100% customised and users can alter as per their own requirement. It also allows the users to transfer TRC20 tokens instantly and the user can earn mining rewards and trading fees. This also delivers high scalability and decreases the gas fee because they run on the Tron blockchain.

Why is JustSwap Clone Script needed for your DeFi Business?

Typically, Justwap works on the smart contract developed on the TRON blockchain and hence it is enough to create outstanding decentralised applications and decentralised autonomous organisation (DAO) efficiently. Some of the predominant perspectives of the JustSwap clone script are unlimited liquidity, open-source software, low transaction fee and so on.

The premium features of the JustSwap decentralised protocol are listed.

JustSwap clone script helps you to launch your own decentralised exchange like JustSwap on which the traders can exchange their TRC20 token without any obstacles.

JustSwap clone script protocol will be available to everyone all over the world without any discrimination, which in result provides the true decentralised financial options such as TRON

This also allows the user to customise your business model without any trading commission in the starting phase of your marketing and growth to gather most of the user attention in a wider range. So, most of the traders will access your platform with the hopes of acquiring maximum profit.

No restrictions will be enforced for trading in JustSwap because this DeFi protocol will not have Know Your Customer policy in this protocol.

JustSwap DeFi protocol has the ability to exchange from errors as robust security and is offered to enhance the security level of the decentralised exchange protocol on a huge scale.

How does the JustSwap clone script work?

As discussed earlier, JustSwap clone is a decentralised and highly automated liquidity protocol with limitless features of liquidity.

Since it is decentralised, there will not be any interference of any organisation or authority for checking the orders. It provides the instant exchange without any checking order for the traders.

In case, if you want to exchange the tokens, you need to pay a minimum fee of 0.3% as the trading fee to the particular liquidity provider.

Smart contracts are used to manage the JustSwap DeFi protocol operations and therefore each and every pool trading supports the token exchange.

It also provides many traders, especially hundreds and thousands of projects with liquidity i.e without any limitations. Basically, it handles the function of x*y to assure the legality of the transaction. In the above function, x denotes token1 , y denotes token 2 and k denotes the constant number.

Every interchanging process is conducted by substituting some of the tokens with some other tokens.

Since k remains constant without any change, the remaining tokens will get updated accordingly.

Dynamically developing the JustSwap clone will take more time from you and in addition to that you need to have a deeper knowledge on high level programming language. To remove these problems, our developer team will develop a perfect JustSwap clone with the edge-cutting technologies.

In the process of developing the JustSwap clone, the course code will be scripted using the high level programming language, tested, debugged and at last, compiled to deliver the source code to create a DeFi based decentralised protocol just like JustSwap on Tron blockchain.

JustSwap supports swap between the two TRON tokens and both the TRX and TRC20 tokens are financed for the transactions. Some of the tokens and cryptocurrencies that are available in JustSwap clone script are like BTC, LIVE, USDJ, PEARL, USDT, UTU, HT, FIST and WBTT.

Finally, the major features of the DeFi JustSwap clone are:

JustSwap clone DeFi protocol is developed by clarisco - a leading DeFi development company develops DeFi protocol similar to JustSwap on TRON blockchain. We develop your TRON JustSwap clone to provide instant swap between TRC20 tokens for traders and hence developing a free threshold of profit for market makers. Our techies build TRON justSwap clone script protocol which is fully dedicated to speed up your decentralised projects on the internet via blockchain technology and dApss using smart contracts.

Book a Free Demo for the JustSwap Clone script